After Saturday's rehearsal, I was about to back off on my plan to attend a capture the flag game on Roosevelt Island put on by a few people from the improv theaters. I was about ready to give in on my anti-social feelings, when I pushed myself to go at the last minute, and it was amazing. This was our playing field: 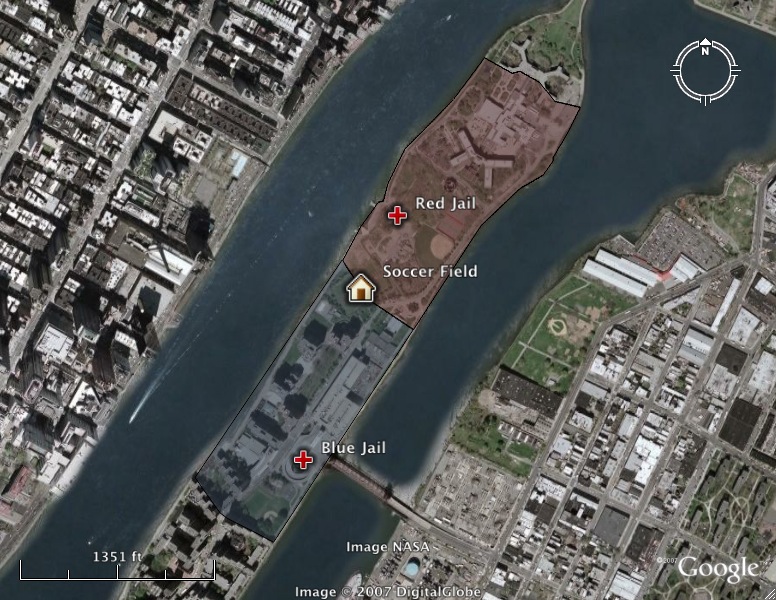 Our tactics included jumping down to the river front and climbing the rocks along the East River, riding the bus from one end of the island to another while ducked among the civilians, and asking a stranger for a ride right to the flag. I played defense in the third match, and Alex Sidtis flanked us from the south end of the island. The base commander, Kevin was the first to spot him and he called me up to follow him. My job was a roving defender, watching the bus route, as well as the West and South approaches, so I tailed him from a distance. I hid in the trees by the play ground, and followed his bright blue shirt and red cap. He eventually got into a crowd outside the hospital, where I ran after him, following him around a corner, and he was nowhere to be found. I returned to my position, where I eventually saw another red team member in a white shirt coming up along the water from the south. I couldn't see who it was, but I saw the red flags hanging from his belt. I started tailing him from a distance. When I ran to catch up with him after he turned a corner, again, he was gone. I went back to the playground, where I saw Alex hiding behind the hand ball court, changing from a white shirt back into a blue shirt.

The whole day was awesome. My blue team won two out of three games.
Collapse